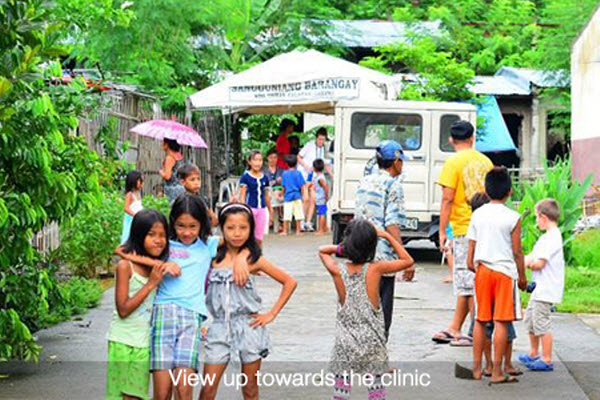 Glebe based GP and medical educator from the University of Notre Dame, Dr Charlotte Hespe, has long been involved in charitable work through her church community at St Barnabas Broadway, Sydney. But when given the opportunity to use her medical skills abroad, Dr Hespe realised ‘charity’ wasn’t the answer.

“I took part in a medical mission to the Philippines in 2010, following a major flood that had occurred, displacing a small church community from Manilla,” Dr Hespe said.

“The government had resettled them in a tiny rural village south east of the city of Manilla, called Calauan.

“They were living in concrete besser block homes with no electricity, no running water and no access to shops, work, education or fresh food.”

While the need was clearly there, Charlotte knew that the level of help she and her colleagues could provide on a short, one-off medical mission wouldn’t be enough to make a difference to the community.

“The initial medical mission was a very one dimensional experience, I felt like we were just there to provide momentary western medical ‘magic’ and was horrified that we weren’t really doing anything to improve health on a broader scale,” she said.

“It felt like the mission was all about making ‘us’ feel good, rather than creating real change for the people we were meant to be helping.”

After returning home to Australia, Charlotte worked with her fellow volunteers at St Barnabas “Barneys” to come up with a plan that would not only provide ongoing support but also empower the community to support itself.

“Our goal was to improve the general health and vitality of the community, through the provision of health care, but also through education—the idea was to provide the hook rather than the fish.”

Raising money for a number of infrastructure, education and health provision projects, Charlotte called on her first and second year medical students from Notre Dame University in Sydney to assist her with the program.

“I first took students over to Calauan in 2013 and it has grown exponentially ever since—I now have a team of two other medical teachers who come with me twice a year, with each visit focusing on a growing number of identified areas of medical need,” Dr Hespe said.

“We provide full medicals, access to medication, and employ a full time community nurse who can supervise the medical program and medications, making it easier for people to maintain a commitment to their health without having to go to the city. She also oversees a long term health education program with the community members.

“We have also established a women’s health clinic, where we use a third world pap screening test which allows us to diagnose on the spot—we have performed almost 600 tests and picked up a couple of cancers, so it’s definitely been worthwhile.”

The team are now providing regular dental checks and preventive care as part of their healthcare offer, and will be taking their first dentistry students from Charles Sturt University along with them in November.

In addition to medical and dental assistance Charlotte and her students have also overseen the community in building mushroom farms, chicken and goat breeding programs, as well as teaching them to grow vertical gardens using fresh soil from their own worm farms.

“After three years of conducting the program we have established a wonderful sense of trust with the local community because they know we’re coming back.

“The Team Philippines program has given the community an opportunity to make choices about their health and wellbeing, it’s not about charity, it’s about empowerment.”

Regular patients of our practice can ring the Sydney Medical Co-operative Service for an after hours home visit.